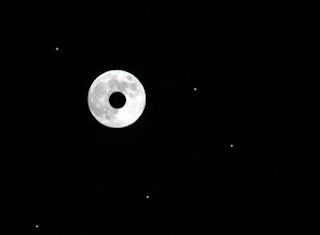 
I imagine the disc of the full moon
bored in its center,
Pi of most ancient China
carved of white jade
-----or mother-of-pearl
hung on the breast of the night

I would give it to you
as reminder of the cosmos
of which you are a part,
to protect you
-----from indifference,
from the blindness of the everyday,
to wake in you
-----the child
you have oppressed
-----with so much foolishness.

-
Posted by Rafael Jesús González at 7:50 PM No comments: 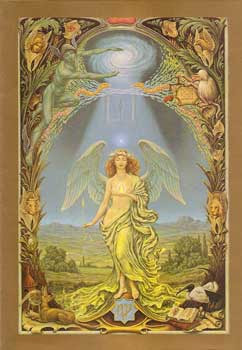 America: Redirecting our fears to beauty and growth »

BERKELEY, CALIFORNIA: Poet and artist Rafael Jesús González was born in El Paso, Texas, a stone’s throw from his family’s native Mexico, and has lived all his 74 years contemplating borders: why they separate us and how we can remove them to build a healthier world.

“I call myself Mexican because saying Mexican-American is a redundancy,” he explained politely but firmly as if he was back in a classroom teaching English, which he did for years at the college level. “Mexico is in the Americas and you cannot be Mexican without being American.”

Words are central to Gonzalez’s creative toolbox and he has two entire languages at his command. “I think and work in both English and place oriented. If I’m in Mexico, the Spanish takes over. In the United States, English takes over. Language for me is situational.”

Or, in other words, language, culture and nationality are permeable borders for the poet, who crosses back and forth between realms at will. Opening a González volume of poetry, as he did during our visit, Spanish and English versions of his poems appear side by side. But, in González’s world, neither version is dominant. In fact, the languages depend on each other.

“I’ve always had trouble explaining this to editors when my poems are published,” he said. “They always want to know which one is the original poem and which one is the translation. I say: Neither is the original. Both languages work simultaneously in my poetry and they inform each other. At the end, there are two versions of the same poem, one in Spanish and one in English. One is not a translation of the other. They are two complete expressions that work together as a single work.”

As with language and culture, González’s faith has moved to what he describes as a deeper, more unifying level of spirituality. ”I was raised very much a traditional Catholic as most Mexicans are and, for a while, I entertained thoughts of becoming a Franciscan priest. Then, in my college days, I became a born-again pagan, so my spirituality now is somewhat eclectic. As a pagan, I follow Earth-centered spirituality where the holiest most sacred thing we know is the Earth and all she sustains. In this, we are connected with native religions around the world.”

This summer, visitors to the Bay Area are learning about González’s life through an installation at the Oakland Museum of California, a statewide museum of history and art in Oakland. The poet was one of 24 Californians invited to select and install a collage of artifacts from their lives in the formative era of the 1960s and 1970s. González’s installation includes his first faculty ID badges when he still had black curly hair, the manual typewriter on which he completed his first poetry collections, an icon of Our Lady of Guadalupe as well as native symbols, including herbs. 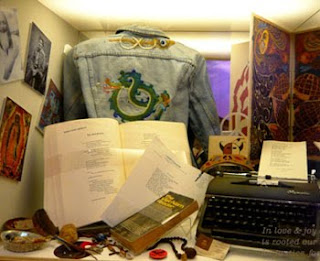 OAKLAND, CALIFORNIA: Poet and artist Rafael Jesús González created this installation for the Oakland Museum of California about his life from 1960 to 1975. Taken with González’s permission. Photo of installation: David Crumm


At first glance, this installation might seem to be an intellectual curiosity. Even González’s poems draw on such a wide spectrum of natural signs, especially the moon, that they can seem distant from the challenges of contemporary American life.

That’s where his border-crossing perspectives may surprise his readers. One of González’s more startling claims is that, in reality, America has one of the world’s lowest standards of living. Here’s how he explains that claim:

“Right now, our country and our culture are based upon anxiety. Our culture measures a person’s worth in dollar signs and in the amount of consumption in which we indulge. That produces a great deal of anxiety. We also have many real reasons to feel anxiety right now. There is no universal health coverage, so an ordinary middle-class family can be thrown into absolute poverty if there is serious sickness in the family. We’re not a very kind culture. We don’t feel we get anything from our taxes and we don’t have an economic system that makes sense or has any real compassion for people. We base our culture on competition, consumption and in the end it becomes an abusive culture for so many.

“In our country, we are always bragging that we have the highest standard of living in the world. But, in my experience we have one of the lowest standards of living. It depends on how we define this standard. Here claiming that we have the highest standard of living means that we are the biggest consumers in the world. To me, that is not a measure of wellbeing. To me, I think Mexico has a higher standard. There is much more music in the streets, more dancing in the streets, more color. There are more holidays that have so much meaning in them that they flow through the streets until everyone shares in them.

“In the United States, people don’t sing in the streets. People glue their own private music to their ears. There is no culture of dancing in the streets. We don’t share holidays celebrating anything of great meaning. I think we have a very low standard of living. I’ve worked to bring my own standard up higher by emphasizing joy in my life and by emphasizing joy with others, but that is not enough.

“From my point of view, we were never kicked out of paradise. We just screwed the place up royally. Now, we have a lot of work to do in this world of ours that we realize is smaller all the time. We must begin with music, singing, dance and the arts. They are gone now from so many schools. We must begin again to teach these most essential things: the arts, the importance of love and ways to find and celebrate our joy together.”

(Photos and story by www.ReadTheSpirit.com Editor David Crumm and his son Benjamin who are devoting 40 days and 9,000 miles to circling the United States and talking with Americans about what divides and what could unite us.)
-
-
Posted by Rafael Jesús González at 12:00 PM No comments: 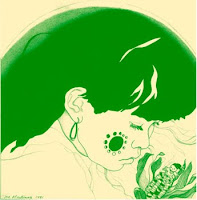 On August 2010, EL TECOLOTE celebrates 40 years of existence serving the Latino community of San Francisco and beyond. As part of this celebration a special 20-page edition of EL TECOLOTE LITERARIO is to be released on July 28, 2010. A bilingual hard-copy anthology featuring the works of established poets as well as those emerging new voices is in process at the moment. This collective reading of 37 poets is a fundraising benefit for the edition of the anthology book.
Music by Francisco Herrera Brambila

-
Let us keep a moment of silence for Nagasaki which, three days after Hiroshima , sixty-five years ago was victim of a nuclear bomb. Never, ever must we allow this to happen again. 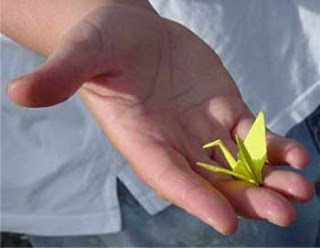 A girl in Japan
taught the world to fold paper
cranes — still there is war.
Blessings written on their wings,
oh, paper cranes, fly for peace.

(to make an origami crane)
-
Posted by Rafael Jesús González at 12:00 AM No comments:

-
It was on this day in 1945, sixty-five years ago, that the United States dropped an atomic bomb on the city of Hiroshima, Japan. Three days later, another on Nagasaki. We must never let it happen again; we must work for complete nuclear disarmament throughout the world. 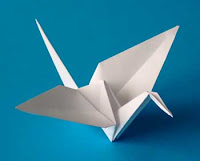 It's said that if you
fold one-thousand paper cranes
your wish will come true.
For peace I would gladly spend
the rest of my days folding.


In June of 1983, imprisoned in Santa Rita Prison because of blocking the entrance of Lawrence Livermore Laboratories, California, where nuclear arms are designed, we occupied ourselves folding cranes from old newspapers; among us all, we made more than a thousand to send to Japan.

(to make an origami crane)
-
-
Posted by Rafael Jesús González at 12:00 AM No comments: