Day of the Corn 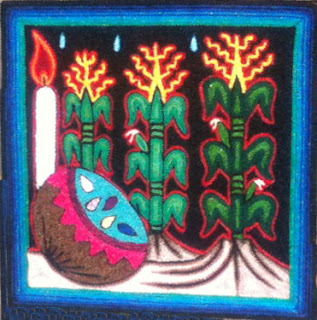 
Corn, say the grandfathers, grandmothers
blooms in a modest, humble flower
then its red tassel, headdress of feathers,
in its ripeness the corn cob
is of grains of gold, beads of green stone.
Bracelet, they said, precious,
----------our flesh, our bones.

Let us awake, rebel,
sons, daughters of the corn —
enough of sorcerers & liars —
it is our lives that we defend,
our sustenance, our holy corn.

After the Presidential Debate 9/26/16 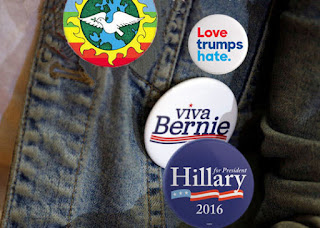 After the Presidential Debate

Monday night I came home from watching the Clinton-Trump debate with friends fully convinced that we must elect Hillary Clinton President of the United States with an overwhelming majority.

I have made no secret of my displeasure with the choices for president that we have been given. But truly, how often in our lives are we given ideal choices? The dilemmas in our lives between two goods may be bitter sweet and the choice between the good and the bad may hardly be a dilemma at all. But the most wrenching dilemmas are between two bads and we have to weigh which of the two is the better, the less harmful, least painful, more open to change. The choices that we are often forced to make must be pragmatic.

I may not like the choices with which I am faced, but truly, what choices can we expect from the empire? The choice is indeed between bad and worse. What the debate clearly showed was how much better one choice is than is the other.

The very demeanors of the two candidates were enough to highlight the superiority of the one over the other. Hillary Clinton was poised, self-possessed, in command of the situation at once alert and at ease, clear and articulate of her positions and facts.

After all, she has been tempered at high heat by her positions as First Lady, as Senator, as Secretary of State. She has trained, as Hillary pointedly said, to be where she stood and to stand as President of the nation. And she stood well, confronting Trump firmly but courteously, even with sly humor at times, always maintaining her ground and her position. And she very clearly stood by those pieces of the Democratic platform which we who supported Bernie Sanders placed.

On the other hand, the debate clearly showed Trump for the immature buffoon, racist, misogynist. misinformed liar that he is. He showed himself petulant, bullying, easily angered, and obstinate in his misinformation and lies even as they were called out by both the moderator and Sec. Clinton. His lack of any poise and dignity, any self-control made me cringe to imagine him as head of the nation, the empire.

Even The Arizona Republic, a newspaper that since its beginning in 1890 has never endorsed a Democrat over a Republican has taken the unprecedented action of endorsing Secretary Hillary Clinton over Donald Trump.

What most terrify me are those for whom he speaks in his belligerent hatred and ignorance, those who identify with a thug distinguished only by his great wealth, much of it arguably ill gained. And they must be many to have brought him to this point. To me the dilemma is hardly one at all. We must elect Hillary Clinton resoundingly in repudiation of the racism, the fear, the hatred, the ignorance that permeates so much of our society.

Senator Bernie Sanders, Senator Elizabeth Warren, Noam Chomsky, Rachel Maddow, Michael Moore, and many, many others warn us that we cannot afford a protest vote Green or Libertarian or write-in or not to vote altogether. We must vote Hillary Clinton - and a Democratic Senate, a Democratic Congress, and in our local city and state governments those who will uphold and wage Our Revolution for justice, peace, and the well-being of the Earth.

-
Posted by Rafael Jesús González at 9:30 AM No comments: 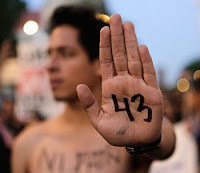 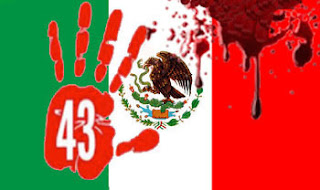 
We raise our hands not in suplication
but desperation, rage, demand,
protest against the bloody hands
of the criminals & the government
impossible to distinguish the ones from the other.
“I am tired of so many scoldings,”
said the prosecutor. Well, be more tired yet,
Mr. Prosecutor for we want
our children, ours of the people
that alive were taken
& live we want them back.
We will go on raising our hands
with the “43” now a motto of the injustice
that we suffer & is no longer tolerable
that we suffer any longer.

Meanwhile the president
visits the U. S. of A. to discuss
security & the economy.
Whose security & economy?
Ask for more weapons for crime
& repression? The security of the rich?
Assuring them profits at our cost?
Surrender the economy to foreign enterprises
of “Free trade”? Do not confuse us
with flags now stained, dirtied with outrage.
Tired are we & we raise out hands
crying like la Llorona for our children
who alive were taken & alive we want them back.