The scales dip and teeter;
there is so much
to discard,
so much to atone.

When our temples stood
we loaded a goat
-----with our transgressions
----------and sent it to the wild.
Now we must search our pockets
for crumbs of our trespasses,
our sins to cast upon the rivers.

Posted by Rafael Jesús González at 7:00 PM No comments: 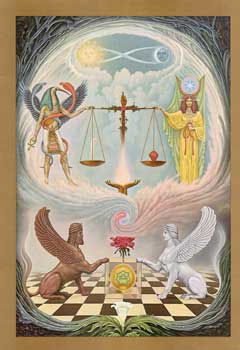 
The balance of day and night
is lit by the early sapphire of dawn
-----and the late opal of dusk.
It rises on obelisk of nephrite, of jade
to the cardinal point of the air,
the lever of the wind,
----and on each copper plate
----are measured art and consequences
--------(love weighs on the back
---------of indecision,
---------on the loins of desire.)
The fulcrum of autumn
holds over chaos
tremulous and irresolute
----feeling, thought —
--------love, beauty, truth —
dreams, always dreams, just dreams. 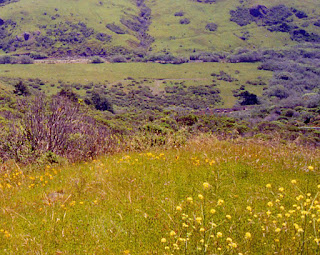 Advice For The Fall Equinox

Walking in balance is not easy —
to step so lightly
the grasses are not bent,
to step so firmly
one’s track points
a way through the thicket.

Indeed it seems our nature to be
off balance,
one foot stepping so lightly
one so firmly
that lost in the desert
we always walk in a circle.

There are worse fates; let us then
learn to walk the circle in joy.
The seasons turn & return
one upon the other
& there is nowhere to go;
the Earth is Home enough;
the walk, all too brief,
leads Nowhere.

To learn to walk in balance
practice the dance. 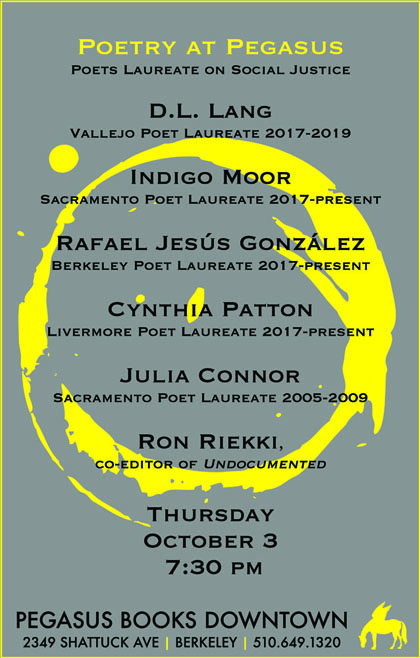 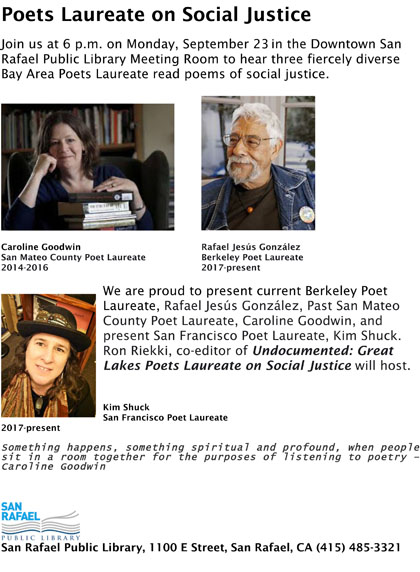 -
Posted by Rafael Jesús González at 4:16 PM No comments:

As many of us adults stand idly by as we distress the Earth more and more, the youth of the world have called for a general strike this Friday, September 20 (and actions the seven days following) to confront climate change.

Let us all follow the leadership of the youth whose future it is and join them wherever we are. Find an action nearest you and join them.

We must awake to this global emergency and do what we must to heal the Earth and protect the life she bears. NOTHING, NOTHING IS OF GREATER IMPORTANCE. 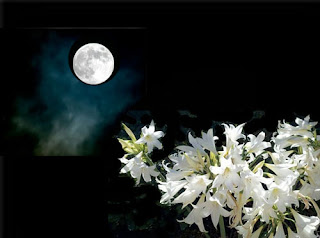 -
Posted by Rafael Jesús González at 9:32 PM No comments:


Working late, I greet this September 11th, date of grieving memory, with pain and dread.

I have meant to write on the domestic terrorist shooting in my hometown of El Paso, Texas since it happened on the 3rd of August killing 22, wounding 24 men, women, and children, and leaving a great portion of the nation terrified. It has taken this much time for me to process the pain, the fear, the confusion, the rage that I have.

The young terrorist specifically targeted my people (the Mexican, the Chicano, the Central-American, the Latino — whatever label you would give us); the manifesto he left behind leaves no doubt. Our "Latino" communities are terrified: terrified of speaking Spanish in public, of congregating in large groups — of going to school, going to work, going to church, going shopping, walking anywhere.

We are terrified not only of the terrorists that lurk we cannot predict where, but of the police, ICE, officers of the law: the hues of our skin, our Spanish language, our accents of themselves make us targets to be stopped for nothing at all — even though we may have been born in the U.S.A. and elderly, perhaps not even speaking Spanish at all and speaking English with a regular accent.

The most vulnerable of us have no "papers" to protect us and live in much greater fear — fear of being taken at work and leaving our children alone, uncared for, with nowhere to go, terrified; fear of going to school and coming home to a deserted house without parents to take us in their arms.

Many of us at the border have our children wrenched from our arms, taken to separate jails we don't know where. Our children, terrified, confused, wrenched from their mothers', fathers' arms are caged, uncared for, abused, some ill unto death. This is nothing less than torture.

My sleep is often haunted by nightmares; lying in bed mornings, my heart is lacerated imaging the terror, the unspeakable pain of these children, these mothers, fathers (brothers, sisters, grandparents, aunts, uncles —kin and friends.) During the day, my mind wanders, imagining such terror and pain.

We are ruled by fascists — a fascist president ignorant and cruel beyond belief who incites terrorism, a Senate and a Supreme Court that enable him — and what advances in democracy we thought we had accomplished since the founding of the country are now under attack and at great risk. 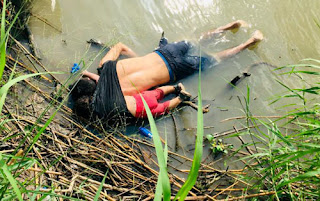 
The date of September 11 is a day of tragedy for more than one reason. 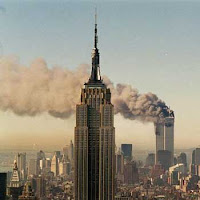 It was on this day in 2001 that the twin towers of the World Trade Center in New York were destroyed bringing in a new era of fascism in the United States and launching the invasions of Afghanistan and Iraq. Now, the nation is deep in an illegal, immoral, and untenable war making the world infinitely more vulnerable to terrorism by nations (such as the U. S.) and organizations (such as al-Qaeda.) On that day, I wrote:


Love & Thoughts to my Friends on a Dark Day

Since early this morning when a friend from New England called with the news of the destruction of the World Trade Center towers in New York, I have been in a daze, too stunned to sort out my feelings, my thoughts except for confirmation of my deep abhorrence of violence. Certainly pain and anger are there — and great fear.

And despite the images on television, there is disbelief. How could it happen here? How could it happen to us? The mightiest contemporary nation, the current most powerful empire is vulnerable. Seeing the images of the twin towers, symbol of the greatest wealth and power on Earth, flaming, smoking, and finally collapsing against the skyline of monoliths that is New York made me think, in the midst of the horror of it all, of Goliaths falling in the plain. The Earth is shaken by their fall; the death, the pain suffered by so many through their fall wrings the heart. I am stunned by the pain of it.

But who the Davids are we do not know. Certainly not heroes to me nor to any one I know; villains rather. Davids in size only. But still, seeing some televised images of jubilation in parts of Palestine/Israel, they must be heroes to some — and to some in other places of the world as well.

Terrorism is a frightful term; even more horrible is its reality. What does it mean? Webster’s New World Dictionary succinctly defines it as: 1) use of terror and violence to intimidate, subjugate, etc., especially as a political weapon or policy; and 2) intimidation and subjugation produced in this way. Terror.

I see those images of jubilation on the television and I wonder what could induce such elation at such destruction, such death, such suffering. Terror. Terror like that in New York today except on a smaller scale, day to day terror at the hands of Israeli soldiers, and terror in response, and then more terror in retaliation — a story without end.

And who has most to gain by it? A hundred images come to mind, but a simple, nagging cipher blinks on and off against them all: we in the United States are six percent (6%) of the world’s people and yet we consume sixty percent (60%) of what the Earth gives. (And, we hold the highest proportion of our people in prison.) These are formulas of terror.

I would like to think that we could respond to this horror in New York and Washington, D.C. with a commitment to justice for the world. Not merely the primitive, crude vengeance and retaliation I hear demanded, but true justice that would put an end to terror, not only the terror such as that of this day in New York and in the Capital, but the day to day terror of hunger, of lack of medicine, lack of shelter, of education, of freedom and the violence all that brings. Terror.

I am afraid for the peoples of the world. I am just as afraid for us citizens of this United States. I am afraid that the tragedy of today will be used to justify the destruction of what freedom, what civil liberties we have, of a democracy for which clearly the President of the United States and his ilk have no respect.

I am afraid of Goliaths and of the Davids they breed.

But still, more deeply rooted than my fear is my love of the Earth and of its people and of all our relations. Because of this, I trust that our work toward justice and peace will go on in joy of life and that, for all the darkness, it will prevail.


The towers fall as if,
-----seen through crossed eyes,
a Goliath fell brought down by a David.

Death is inevitable, not fair.
And when the innocent are caught
in the webs of violence, it is terrible.

May the Earth hold them in rest.
If we would make a monument
worthy of their deaths,
in honor & memory of them,
let us pledge ourselves
----- to freedom,
----- true justice,
------world peace.

For if death be not just
let just be our lives. 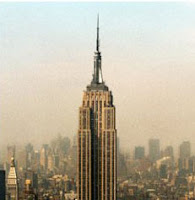 
On a more personal level, it was on September 11, 1991 that my beloved friend and comadre, scholar, organizer, activist Guillermina Valdés de Villalva was killed when a Continental Airlines airplane crashed near Houston, Texas. Sick with pain and rage, I wrote: 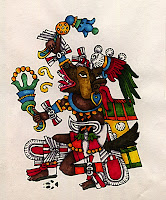 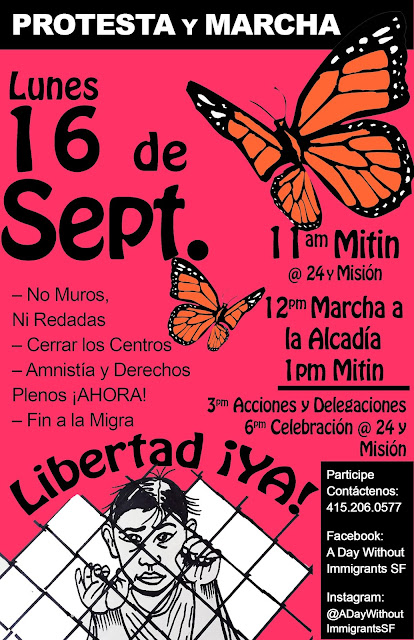 -
Posted by Rafael Jesús González at 1:23 PM No comments: