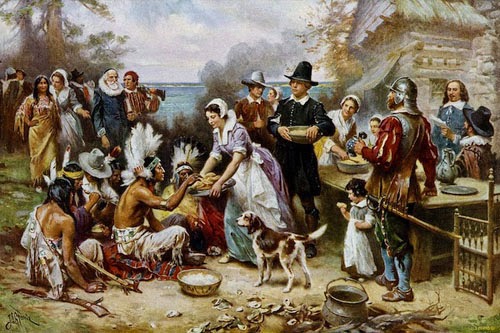 Preparing to celebrate Thanksgiving, favorite U.S. holiday (for we must always be thankful for blessings), it is well for us to recall the history and myth in which it is clothed and reflect upon it.

If in 1621 "Tisquantum" or "Squanto" of the Wampanoag nation, who as a boy or youth was taken as a slave to England fifteen years before the “Pilgrims” came to America, helped the ill-provided colonists and with his tribe celebrated thanksgiving with Miles Standish and the colonists of Plymouth Plantation, it was because the Algonkian tribes were generous and held six thanks-giving festivals during the year (that one being their 5th one of the year.) They brought most of the food, including four wild turkeys, for the feasting.

But it seems that, as William B. Newell, a Penobscot Indian and former chairman of the Anthropology department at the University of Connecticut, points out, the first officially declared Thanksgiving Day by the Governor of the then Massachusetts Bay Colony was the day following the slaughtering of a Pequot village of 700 men, women, and children who were celebrating their annual Green Corn Dance, in June 1637 executed under the command of one John Underhill and documented by William Branford.

In fact, a proclamation of such a holiday recorded in Charlestown, Massachusetts, thirty-nine years later, June 20, 1676, refers to the indigenous peoples of this land as “the Enemy” in “the present Warr with the Heathen Natives of this land.” And the governing council of Charlestown, Massachusetts set June 29 to thank the god of the Puritan “pilgrims” for “giving us especially of late with many of our Confederates many signal Advantages against them [the indigenous people],” thankful “when our Enemies are in any measure disappointed or destroyed.”

It first became a national holiday declared such by George Washington in 1789 for November 26. Abraham Lincoln revived the custom in 1863, and Congress decreed the holiday should fall on the fourth Thursday of November in 1941. And so it is, a holiday with antecedents in the remotest times of human history and burdened with national myth and fact, piety and villainy more often than not inextricably intertwined.

Since 1969 or 70 on San Francisco Bay, the day is begun at sunrise with American Indian ceremony at the gathering of the tribes on the island of Alcatraz as reminder of the history of this land — and as rededication to changing its course for the better.

Feasting with family and friends in thanks for the blessings of life, Thanksgiving is a holiday of celebration whose joy is marred by a consciousness of our nation in continual war and destruction of the Earth. The government (we, if we tolerate it) not only wages war unjustly, unlawfully, justifying itself through lies and deceit, but violates the U. S. Constitution and Bill of Rights so that our civil rights and liberties are less and less guaranteed. The wealth of the nation is concentrated in the hands of the one per cent rich and powerful, and most of our people will celebrate this day with less wealth, less security, less freedom, less learning, than 38 years ago. And the struggle to create a democracy continues, now under even more difficult conditions.

In the midst of this pain and exasperation, we must give thanks for the gifts of life and the sustenance of the great Mother the Earth. And for each other, and all our relations the other animals, the plants, the minerals. We give thanks mindful that in our gratitude we must also raise our voices in the name of justice and peace resolved to make amends and undertake healing knowing that gratitude for that which we enjoy at the expense and suffering of our brothers and sisters is blasphemous and unacceptable. 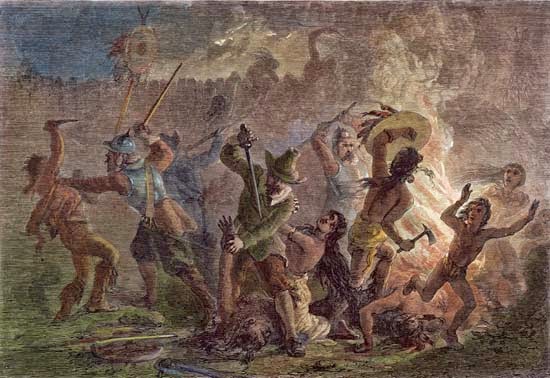 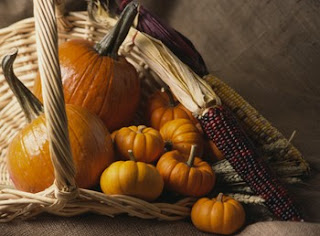 In the 40s when I was growing up and it raged in Germany, Italy, Spain and Europe was being destroyed, I heard it said the it could not happen here.

Then in the 50s when I was coming of age in the McCarthy era, it was apparent that it could.

Now in 2019 that I am an old man, it has; that best of democracies that money could buy reveals itself for what capitalism always tended to be fascism. Let us call things for what they are.

To say that we are in crisis is to put it mildly. We are at the edge of a cliff. At risk is not only what little democracy we had been able to painfully, slowly create, but the very ability of the Earth to sustain life.

Now we in the U.S. are in the midst of elections, that most basic foundation of democracy already compromised and threatened, and soon a president is to be elected to head the nation.

Let us be clear, the choice is not between the Republicans who are the very face of fascism and the Democrats who are no guarantee of change, but between a rapaciously competitive capitalism and a democratic socialism responsive to human needs and not to the dictates of "The Market" idolized.

In our terror of the Republican fascists, the establishment Democrats distract us with  "moderate," "centrist," "neo-liberal" candidates financed by the billionaires and committed to capitalism which the Earth simply cannot sustain, who to preserve capitalism offer Band-Aids to staunch gaping wounds, opposing any real change crying that "we cannot afford it," "it is too much," "we must go more slowly."

And if elected would continue to incite fascist coups such as those in Bolivia, Venezuela, and, as in the previous Democrat administration, Honduras. And continue to squander the national wealth on weapons and perpetual wars that they would call "defense" to  serve only the interests, wealth and power, of the "1%." Business as usual.

But if we are to survive, business as usual is no longer an option. Our only option is a long overdue revolution — our revolution of heart and mind rooted in a fierce love of the Earth and the life she bears, land and caring for one another, a world of justice and peace in which everyone has the essentials for health and happiness, a revolution of love and joy. Nothing else will do.

The only candidate who offers a real plan for the necessary revolutionary change is Sen, Bernie Sanders who, had he been permitted, would have defeated POTUS 45 in the 2016 elections. We must have him as the presidential candidate of the Democratic Party in 2020.

And meanwhile and all along we must elect progressives at all levels of government (local, state, national) who would put in place and support programs for the good of the Earth, justice, peace.

Let us elect Bernie Sanders President of the United States and join me in our revolution to make a democracy, to survive, and create a new world found on love and caring and cooperation among all human beings. Let us awake! The moon is silent over the bodies
on the fields of war & at the borders
closed to those seeking asylum,
the dead of cruel sanctions
& blind drones — & silent over those
intent upon computers that drive them
& the powerful who make the wars
& silent over the veterans dead or alive
who fought them. The moon is cold,
the moon has no heart. 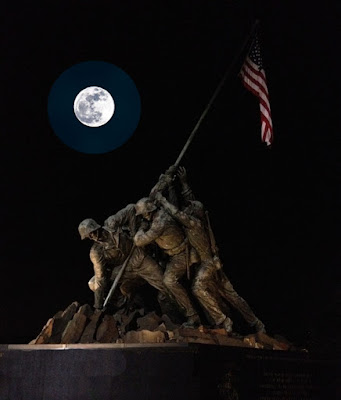