To share a moment to rember: Sen. Bernie Sanders in Oakland

-
To share a moment with you, yesterday, Memorial Day, I went to an event at the Allen Temple Baptist Church in Oakland where Bernie Sanders spoke.

with a note reading:

"Xochipilli Latino Men's Circle of San Francisco Bay present to Bernie Sanders the Universal Earth-Justice-Peace healer's badge in recognition of his commitment to the Earth, Justice, Peace, democracy. May 30, 2016."

With the help of my friend Aaron Ableman, I was able to put it in the hands of one of the organizers of the event to give to Bernie and left it at that.

To my great surprise, at end of the program, the woman mc'ing the event read the note and presented him with the badge. And then beautifully read, to much applause, the poem I had written to Bernie some time ago.

It is no little thing

when speaking before thousands
to be visited by a finch
upon the podium.
The trust of creature so small
easily startled by the slightest gesture
must surely count for something big.


On his way out, someone pointed me out as the author of the poem and Bernie paused to thank me, we had a very brief exchange, and he hugged me before he left. I pray it was a hug from the next president of the United States. 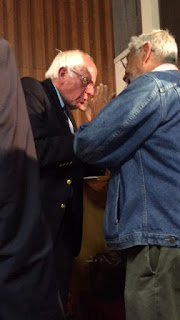 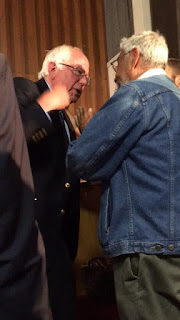 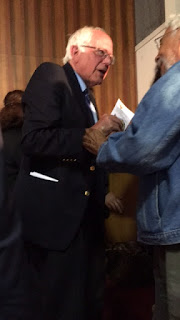 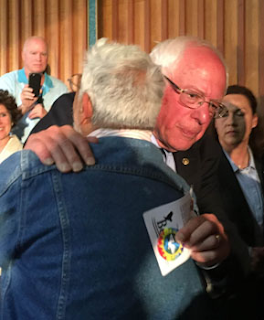 I share with you the link to the video of the event. It is well-well-worth listening to in its entirety. However if you do not have the time just now, you may want to skip to 1:02.5 and listen to the end.

For you who live in California, please vote, for whomever your conscience and your heart dictate, now and certainly on Tuesday, June 7. The world depends on it.