-
-
[Precious little has changed; the U.S. of A. is still in the quagmire of illegal, immoral, untenable war. We are still in Iraq, sinking more deeply in Afghanistan, unofficially involved in Pakistan. And in these times of financial breakdown, it is hardly brought up as an issue; it lies there like the putrefying body of an elephant, ignored and stinking to the high heavens while the politicians insist that funding for health care, education, social security, healing the Earth be cut when what we waste in war could cover all those expenses with more to spare. I take hope in that "Occupy Wall Street", "Occupy Oakland", "Occupy" wherever, is an indication that we are awaking from the nightmare that the "American Dream" has so long ignored.]

-Veterans Day
When the First World War officially ended June 28, 1919, the actual fighting had already stopped the eleventh hour of the eleventh day of the eleventh month the previous year. Armistice Day, as it was known, later became a national holiday, and in 1954 (the year I graduated from high school), the name was changed to Veterans Day to honor all U.S. veterans of all wars.

The only veteran of that war, “the war to end all wars”, I ever knew was my father’s step-father Benjamín Armijo, from New Mexico, an old man who seldom spoke and whom I would on occasion see wearing his cap of The American Legion. (He was also Republican.)

“The war to end all wars” was anything but that and when I was not much more than five, three of my uncles on my mother’s side (Roberto, Armando, Enrique) went off to fight another war, the Second World War.

I missed my uncles and remembered them by their photos on my grandmother’s home altar, very handsome in their uniforms; in the endless rosaries and litanies the women in the family regularly met to pray; and in the three blue stars that hanged in the window.

My uncle Roberto, tío Beto, did not last his second year; he came home and ulcers and los nervios, nerves, were mentioned. My uncle Armando, tío Pana, in the Infantry division or the Cavalry Division (though not one horse was ever ridden into battle in that war), served in the Pacific Theater, and Guadalcanal is a name that in some way sticks in his history. My uncle Enrique, tío Kiki, the youngest, in the Airborne Division, the “Screaming Eagles,” served in the European Theater and parachuted into the taking of Germany.

After that war ended, they came home, tío Pana into a hospital, sick with malaria which affected him throughout the rest of his life; tío Kiki with a malady in the soul not so easily diagnosed, hidden in his quiet humor, gentle ways. All my uncles were gentle men, in all senses of the word. And Beto, Pana, Kiki spoke not at all about their experiences of war in spite of my curiosity and questions which they diverted with a little joke or change of subject. What they had seen, felt was apparently not to be spoken and the family sensed this and respected their reticence. Neither of them joined the Veterans of Foreign Wars that I ever knew.

The Korean War “broke out”, as they say, as if it were acne, not long after. But as for me, I have never fought in any war, though I joined the U. S. Navy upon graduating from El Paso High School to become a Hospital Corpsman and obtain the G.I. Bill with which to enter Pre-Med studies upon my discharge; two of four years in the Navy I spent in the Marine Corps with the rank of Staff Sergeant. The Korean War had already ended. And though I served closely enough to it to be given the Korea Defense Service Medal and am legally a veteran and eligible to join the VFW, I never did nor do I intend to.

If I consider myself veteran of any war, it would be of the Viet-Nam War, not because I fought in it, far from it, but because I struggled against it. (I counseled conscientious objectors, picketed recruiting offices, marched in the streets.) The war veterans I have most intimately known are from that war, many, if not most, wounded and ill in body (from bullets, shrapnel, agent-orange), wounded and ill in the soul (terror, guilt, shame, hatred putrefying their dreams, tainting their loves.)

I am leery of being asked to honor veterans of almost any war, except as I honor the suffering, the being of every man or woman who ever lived. I am sick of “patriotism” behind which so many scoundrels hide. I am sick of war that has stained almost every year of my life. Especially now, in the midst of yet another unjustified, immoral, illegal, untenable, cynical, cruel war our nation wages in Iraq, in Afghanistan. I am impatient with fools who ask whether I “support our troops.”

What does it mean to “support our troops”? What is a troop but a herd, a flock, a band? What is a troop but a group of actors whose duty it is not to reason why, but to do and die? In the years I served in the Navy and Marine Corps as a medic, I never took care of a troop; I took care of men who had been wounded and hurt, who cut themselves and bled, who suffered terrible blisters on their feet from long marches, who fell ill sick with high fevers. If to support means to carry the weight of, keep from falling, slipping, or sinking, give courage, faith, help, comfort, strengthen, provide for, bear, endure, tolerate, yes, I did, and do support all men and women unfortunate enough to go to war.

Troops, I do not. If to support means to give approval to, be in favor of, subscribe to, sanction, uphold, then I do not. The decision to make war was/is not theirs to make; troops are what those who make the decisions to war use (to kill and to be killed, to be brutalized into torturers) for their own ends, not for ours, certainly not for the sake of the men and woman who constitute the “troops.”

Indeed, I find the question whether I "support our troops" offensive, cynical, hypocritical given that we care so little for our veterans: so many are homeless; find no work; have little care for their wounds, physical and psychological; little for their addictions; many are in prison; many commit suicide. This acknowledged, the "patriotism" the question pretends is hollow and blind.

I honor veterans of war the only way in which I know how to honor: with compassion; with respect; with understanding for how they were/are used, misled, indoctrinated, coerced, wasted, hurt, abandoned; with tolerance for their beliefs and justifications; with efforts to see that their wounds, of body and of soul, are treated and healed, their suffering and sacrifice compensated. I never refuse requests for donations to any veterans’ organization that seeks benefits and services for veterans. I honor veterans, men and woman; not bands, not troops.

If you look to my window on this day, the flag you will see hanging there will be the rainbow flag of peace. It hangs there in honor of every veteran of any war of any time or place. Indoors, I will light a candle and burn sage, recommit myself to the struggle for justice and for peace. Such is the only way I know in which to honor the veterans (and victims) of war, military or civilian. 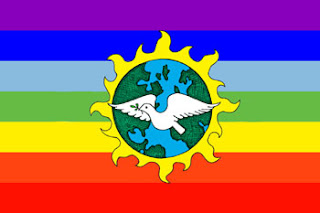 Posted by Rafael Jesús González at 12:00 AM