Of Color and Light 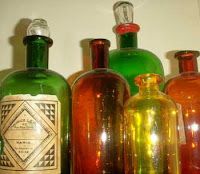 Of Color and Light

When he was five, some neighbors, moving away, left Ramón and his little brother Antonio a dog house with a peaked roof and a door rounded on the top and a square window. It was a large, sturdy, dog house and if he stood in the middle there was even a little room to spare.

Ramón's father was often away. José Filiberto Gutiérrez made the family living by selling school supplies, brilliantine, pomade, olive oil, threads and other notions and novelties in distant little places called Canutillo, Deming, Fabens, Fresnillo, Mesilla, Mimbres, Santa Rita, Silver City. He called himself J. F. Gutiérrez & Co. The company part, Ramón concluded, were his mother Clara and his grandmother and grandfather, aunts and uncles who affixed the labels on the little bottles of brilliantine, red (scented with roses) and yellow (scented with jasmine.)

There were always bottles about the house: the flat, fluted bottles used for the brilliantine, the slender bottles with a bulb at the top and a bulb at the bottom used for the olive oil, and others of more or less interesting shapes. Ramón loved these bottles sometimes more but never less than he did his large box of Crayolas whose fine points he jealously guarded and which smelled like no blessed church candle ever could. His father even built him shelves in the dog house so Ramón could arrange his favorite bottles.

One of those god-inspired days of the desert just after Easter when the sun is an alloy of silver and gold, Ramón snuck from the house while his brother and mother slept the siesta. He took with him some bright crepe-paper flowers his mother had given him and some egg-coloring tablets he'd hoarded from the Holy Saturday past. Another treasure, these egg-coloring pills, large and glued to a sheet of paper with instructions, in English so he could not make out even one word. But he knew anyway. He loved the infusions they made and their smell in water and vinegar and how they stained the white china cups in which the eggs were dipped. And he always objected when his mother or father insisted on emptying them into the kitchen sink, careful not to splatter the white porcelain.

Ramón filled all his bottles with water from the back yard hose and forced crumbs of egg-coloring and pellets of crepe-paper down their tight throats. Some he was careful to keep pure of contamination one by another. With some he experimented, though he knew some things to avoid. (He had learned he must keep the egg-colors he hoarded dry, for if water got to them strange things happened: some lovely strange as when green was touched with blue, but some just plain boring strange like when purple ran into yellow.)

After he finished, he arranged all his bottles (with the years they grew to hundreds) on the shelves his father had made him and he stood back near the far corner by the dog house door. And time stopped. As we know it does on god-inspired days. And the light came in just right. As it does when light is an epiphany. And it poured through all those colors in the bottles and he knew them to be more pure than the stained glass windows at 11:00 o'clock mass.

*...... *...... *
Later this became a measure for happiness mixed up with other things: the happiest moments with his father, his mother, his brothers; his grandmother's laugh; a stolen moment of drunkenness in the Navy hospital X-ray room with his best buddy; cutting psychology class with his love Genoveva (Genny to their gringo friends); the tea ceremony, years later, with his other love Doris.

And with his ambitions. He would be a painter and in his fifteenth year, on a pilgrimage to the Basílica de Guadalupe, drunk on murals, he promised her a painting for one of her side altars. But, no, his mother and father gave him to understand, this was not realistic. Okay, he said, pharmacy, thinking it was chemistry that drew him. But it was probably the flasks, vials, alembics, retorts filled with potions, infusions, syrups, tinctures, elixirs, each differently colored, to be arranged on the drug store shelves. He confused the healing for the color and after high school decided pharmacy was not ambitious enough so he set out to become a doctor—and perhaps a priest to boot. After the navy, college completed, when he was accepted to medical school he decided instead to teach—and to write.

And it took many, many years later for him to suspect that at the roots of his being a poet was the patience of cramming pastilles and bits of crepe-paper into the narrow mouths of brilliantine bottles full of water so that the precise and diffuse colors would bleed against the light.
© Rafael Jesús González 2007 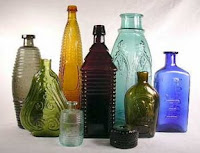 Posted by Rafael Jesús González at 12:01 AM