on stamps and other things 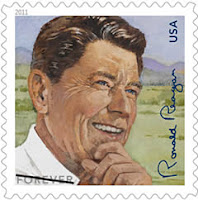 Last week, I walked to the post-office near my home to buy stamps and, having been told that postage would increase the following Monday, I asked to see what "forever" stamps were available. I was told that they had only four designs available: the U.S. flag, the Statue of Liberty, the Ronald Reagan centennial, and the Mercury Messenger.

Finding none of them appealing, I thought, for a second, of asking

for the Ronald Reagan centennial (I could paste them up-side down on the envelope, I thought, or pen a Hitler mustache on his upper lip, or simply jolt my friends into a response.)

My hatred of Ronald Reagan and all he did and stood for is known to all who know me. It is not, I must say, an abstract hatred, but a personal one: as governor of California he dared to invade my city, Berkeley, terrorize its citizens; tear-gas, beat, and jail us; and kill at least one of us, an innocent by-stander merely watching the action from the roof of a near-by theater near the corner of Telegraph Avenue and Dwight.

The two-bit actor went on to the biggest role in his life to become president of the U.S. and carried on his policy of terrorism on an international scale. What we have seen ever since through the last Bush administration and on into the present one has been the logical outcome of the policies he put into place during his term in office. Those policies have terrorized the world, concentrated its wealth in the hands of the few, violated the Earth, and ruined the economy. The suffering in their wake is beyond measure; many are now awaking to the fact. Let us make sure that Ronny Reagan and his legacy is not forever.

I ended up buying the Mercury Messenger stamp.

Posted by Rafael Jesús González at 12:30 AM