This concerns a human social obligation and an act that is all-too-often taken with much too great a lack of thought and responsibility: to judge.

The issues are dire not only for Mexico and the United States, but for the world in thrall to a monster of our making that has run amok out of our control and threatens not only human life but the Earth itself: Capitalism gone mad, Libertarian Corporatism, to use a term suggested by a friend, David Korten.

So on this Labor Day, in honor and support of the worker, the men and women who with their minds and hands create true value, consider this invitation:

¨Injustice anywhere is a threat to justice everywhere. We are caught in an inescapable network of mutuality, tied in a single garment of destiny. Whatever affects one directly, affects all indirectly.¨

The Mexican government and its allies in the U.S and beyond will be put on trial before an International Tribunal of Conscience which will meet in New York City on Friday September 25 and Saturday September 26, 2015. Conveners include internationally renowned intellectuals and human rights scholars such as Noam Chomsky, Tariq Ali, Boaventura Sousa de Santos, Greg Grandin of the History Department and the Hemispheric Institute of Performance and Politics at New York University (NYU, who together are hosting the event), former UN Special Rapporteurs Rodolfo Stavenhagen and Jorge Bustamante, the National Lawyers´ Guild, the International Association of People's Lawyers (IAPL and its Mexican branch), the International Association of Democratic Lawyers (IADL), the Haldane Society of Socialist Lawyers, IBON International, the International Coalition for Human Rights in the Philippines, and the Tribunal's principal sponsor, the network of U.S-Mexico human rights advocates known as Fuerza Mundial Global. Jurors will include participants from the U.S, Mexico, Latin America, Europe, and Asia.

The current human rights crisis in Mexico is unprecedented in the country´s history in terms of scale, depth, extent (over 140,000 dead and 27,000[1] disappeared since 2007, not including a still unknown number of disappeared migrants): Mexico is the single worst violator of human rights in the Western Hemisphere and one of the most egregious in the world.

The initiative to convene the Tribunal grew out of the caravan in the U.S in March and April 2015, and subsequently in Europe, of representatives of parents and students from Ayotzinapa in the Mexican region of Guerrero. 43 students from the Rural Teacher´s College there, mostly from the country´s poorest indigenous communities, were victims of the single worst incident of forced disappearances in recent Latin American history in September 2014[2].
.
This special session of the International Tribunal of Conscience of Peoples In Movement (ITCPM) is timed to coincide with the first anniversary of this incident, and with this year's opening session of the UN General Assembly, and will be dedicated to solidarity with the Ayotzinapa case. From the perspective of the conveners of the Tribunal, the Ayotzinapa case is illustrative, not exceptional: the Mexican government typically seeks to position itself as a victim of drug-related violence, but like its Colombian counterpart, is in fact the perpetrator of, or complicit in, most serious violations of human rights.

The focus of the hearings in New York will be on Mexico's deepening human rights crisis in all of its relevant dimensions, including the role of U.S aid (over $3 billion dollars in military, police and other aid directly related to the so-called ¨drug war¨ since 2007 through the ¨Mérida Initiative¨, which many analysts consider analogous to ¨Plan Colombia¨, plus over $4 billion in arms sales[3]) and that of the North American Free Trade Agreement (NAFTA). It is of course U.S support which keeps the current Mexican régime afloat, and which is thus the single most decisive factor in sustaining prevailing impunity and repression. The impact of such aid and of foreign investment on intensifying human rights violations has been intensively debated by the European Parliament as well[4].

Another key priority of these hearings will be an examination of persistent serious human rights violations against immigrants of Mexican origin in the U.S, and against migrants in transit from Central America and beyond on Mexican territory, including the implications and impact of a continuing exodus of migrant children and youth. The Tribunal´s mandate includes exploration of the relationship between current human rights crisis in Mexico and the crisis in the U.S as to police violence, mass incarceration, and racial injustice, including how these two crises converge within the context of issues as to immigrant rights in the U.S (abuse of deadly force by ICE, Border Patrol, local and state police; detention policies and practices, profiling, deportations, separation of families, impact on children and youth, e.g Dreamers)

Another key aspect of the Tribunal's mandate is to explore the relationship between the impact of U.S policy in Mexico and the impact of related U.S policies (free trade, drug war, and other forms of intervention) throughout Latin America, including key cases such as Central America, Haiti, Puerto Rico, Venezuela, and Colombia. 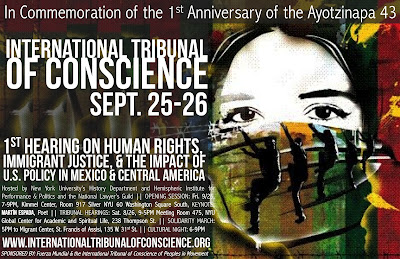 
4. Sat. Sept. 26, Jurors will go directly at 5 PM to space set aside for jury deliberations also located at the Migrant Center, deliberations from 5:30 to 8:30 PM, focused on input for drafting of initial jury verdict to be presented the next day (see point number 6, below)

Schedule of the cases and issues that will be presented on Saturday, Sept. 26.

9 AM: introduction of tribunal, jurors

10:45-11:05: testimony by journalists Anabel Hernández (living in exile in U.S due to death threats) and Steve Fisher (presenting their updated research on the Ayotzinapa case and its implications; also focus on persecution of journalists)

case of San Fernando Massacre (August, 2010, vs. migrants in transit) and mass graves (including testimonies by Guatemalan and Brazilian victims of the massacre) and case of Noemí Álvarez Quillay (Camilo);

lunch break 12:30-2 (jury may be divided into 2 panels and lunch shifts if necessary, to insure all cases are heard)

Be Foundation (Mexico City, Itzel Polo): migrants and the right to identity